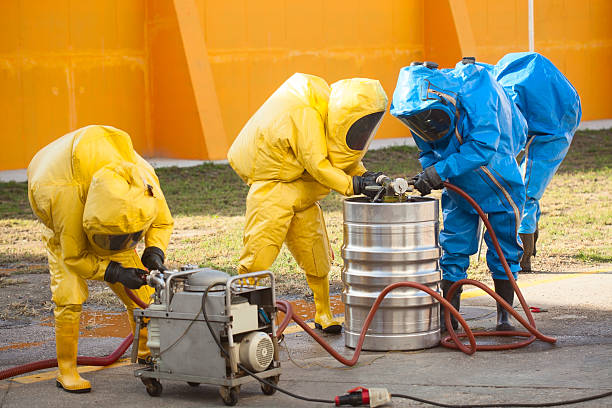 Chemical spills are dangerous releases of harmful chemicals either due to untimely disposal of the said chemicals or the mismanagement of chemicals and/or even fractured chemical storage systems. The dangers posed by chemical spills did not get the full attention of many till late 70s and 80s. One could argue that the Bhopal Gas tragedy of 1984 opened the eyes of many to the potential damage that can be done by chemical spills, because the Bhopal tragedy left thousands of death and several permanent disabilities in it’s wake.

This is however not to suggest that everyone now knows the harm that could stem from chemical spills or chemical waste mismanagement, or perhaps many are aware but unperturbed by its consequences. This in its own is a very disturbing phenomenon, as it could be that very reason that in some regions across the world, chemical spills are still handled with a mediocre stance and chemical waste is directly put back into the environment.

However, it is against this backdrop that this article puts forward the emergency responses to chemical spills, should you find yourself in a chemical spill situation these are the things you could do whilst you await the experts.

Do’s and Don’ts of chemical spill

CALL THE NECESSARY RESPONSE TEAM this is most imperative; you’ve got to call the experts who have the nous to do a chemical spill cleanup.This is often the best way to go if it’s a large spill or you do not know the magnitude of the spill, in any case, even if you do, it’s mostly safer that you CALL 911

Sound the Alarm, it is also very important to create awareness in case of any incidence of chemical spill because awareness is very necessary so that others are not caught unaware

Do not let children near or around any area(s) where there has been a chemical spill.You should in fact clear kids and elderly far away from the scenes of a chemical spill

Make sure to evacuate the area of the spillage to a safer area, if perchance you do not know or cannot tell the magnitude of the spill

If by any chance any sort of chemicals splashes on someone, make sure to continually flush the area that has been affected for some 15 minutes or more.Note that this should be done after you must have reached out to the chemical spill response team in your area.

Be composed, this might sound difficult but endeavor to stay calm, because in the state of panic we tend to make irrational decisions which might lead to an even more detrimental outcome.

What You Need to Know About Ripple (XRP) Cryptocurrency

How to Make Money on TikTok: Tips for Boosting Views and Engagement

Why you need to conduct ethical hacker course?

Save your tax by renting printing machine